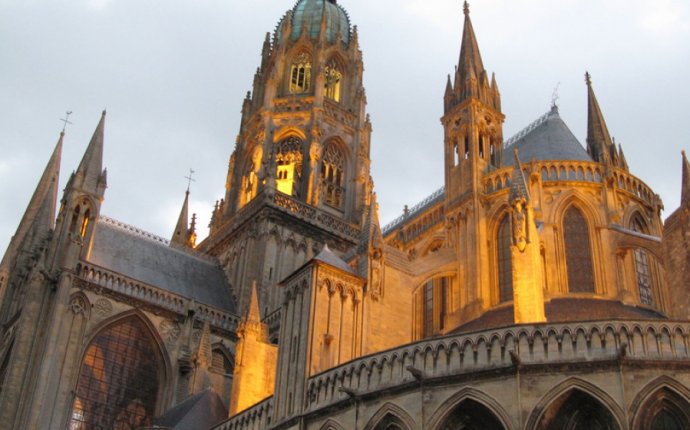 There's more to Bayeux than a tapestry 70 metres long and nine centuries old. Bayeux is one of the few towns in the region to survive WW2 relatively unscathed. So all the charming 13th through 18th Century buildings are still there in the centre of town. From the wooden Norman houses, some which now count as some of the best places to stay in Bayeux, to the great Gothic cathedral.

The famous cloth depicting the Norman conquest wasn't made here, it was made in England, but was 'discovered' here when it was being displayed in Bayeux Cathedral. And it's now kept here in the Musée de la Tapisserie de Bayeux. It's long, but it's not high: only 50cms, and is in 50 or so different panels, or scenes, each with an image, in surprisingly fresh colours, with a description in Latin.

If you're here to see the beaches and battlefields you'll find the 80km stretch of D-Day landing beach is just open sand, fringed occasionally by a fishing village or seaside resort. And of course the many memorials, museums and cemeteries commemorating that period. There are lots of small museums and memorials but in Bayeux you'll find the Commonwealth War Cemetery, the largest British Commonwealth wartime cemetery in France, home to the graves of 4, 144 British dead, and the memorial for another 1, 800 whose bodies were never recovered. And the Bayeux Military Museum. Between Bayeux and Isigny Sur Mer there's a German Military Cemetery, containing the graves of more than 21, 000 German soldiers.

As well as exploring the region's history, the best places to stay in Bayeux have plenty of information which could lead you to the coast or a wider area where there are a number of very pretty local market towns worth visiting.

For a Short Break

For Exploring the Region

@Robert___Harris Hi Robert. Peter from BBC Breakfast TV here. Could we possibly speak to you on the phone about the situation in France?

@ShamaJunejo @StPancrasInt @LPQUK Why all French is written on your breakfast? Are you in France?

@emmablackery Not to defend anyone, but here in France breakfast takes us pretty much the same time 😂

@Philip: i'll never get over the fact the third-best selling album of all-time in France is Supertramp's "Breakfast in America"